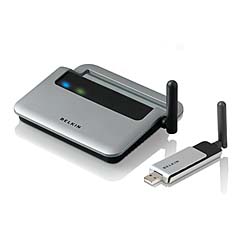 Over the course of the last 10 years, the Universal Serial Bus, otherwise known as USB, has changed the way we use computers for the better. Instead of several different types of ports, USB has become the standard for connecting nearly every type of computer peripheral available. Everything from keyboards to flash drives to printers to digital cameras can be connected via USB. USB is hot-pluggable, which means devices can be plugged in or removed without the need to reboot or without causing any damage, as was the case with older port technologies. The ease of USB has caused the proliferation of many types of USB devices, such as toy kittens and beverage chillers! With all the types of devices that users can plug into their computer, this has also caused the potential for a rats nest of cables. Fortunately, a technology that has been quietly developing for a few years should be soon coming to fruition.

However, at this time few truly wireless USB devices exist. In the interim manufacturers are creating wireless USB hubs that allow today’s wired USB devices to be connected wirelessly to a computer. One good example I found is the simply named Wireless USB Hub from Belkin. While certainly not for everyone, for those users who have a lot of USB devices and could benefit from placing some devices away from their computer, wireless USB hubs like these could be very useful. By moving some devices away from the computer, users reduce the amount of cables connected directly to their computer, helping simplify cable management. It may also increase the amount of usable desk space for some users.

Unfortunately, at this time the Belkin Wireless USB Hub only works with Windows. Mac drivers are in the works and other companies are also working on wireless USB hubs that will work with the Macintosh. Additionally, reviews of the Belkin device show that while performance is generally overall very good, the further the device is moved from the computer, the worse the performance becomes. Therefore, for devices that require higher speed, such as USB hard drives or flash drives, using them wirelessly may not be the best option. Finally, the list price of the Belkin device is currently $199, which seems a bit pricey. But as all technology tends to do, this price will probably come down fairly quickly.

So if you’re someone who has a mess of USB devices at their desk, look into the Belkin Wireless USB Hub. It may help you make some room on your desk for those USB cup warmers or toy missile launchers!

If you have come across an interesting device or emerging technology, please let me know and I may include it in a future newsletter.