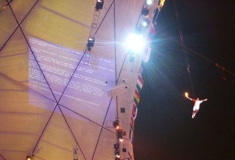 Lenovo, the official technology provider of the 2008 Olympics, rejected the use of Windows Vista for any of the 12,000 vital PCs used for the operation of the games, opting instead to use Windows XP. Quoting the chairman of Lenovo, “If it’s not stable, it could have some problems”. However, in a spectacular display of instability, a Windows XP computer operating part of the light show for the opening ceremonies suffered a “Blue Screen of Death”, which is slang for a total Windows system crash, projecting the super-sized error screen onto part of the stadium. Read more about this Olympic snafu here.