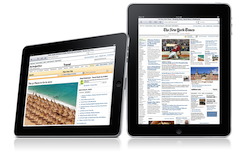 I know that I had the iPad as the January Tech Toy of the Month, but this is such a groundbreaking piece of technology that I felt it deserved another mention. Since the iPad was just released this month and I’ve had some time to review it, there is no better time to talk about the iPad than now. For those of you that are thinking that this will be a boring dissertation on the technical details of a tech gadget, fear not! Because what is important about the iPad is not the tech details, but what the device empowers users to do.

Many people have commented that the iPad is nothing more than a big iPod Touch. The people that say this mostly have not used the device or have only given it cursory usage. Regardless, to those that think this I say “exactly … but that’s what makes it different.” Of course, my response is designed to draw them into a conversation, but the thought behind the statement is spot-on. In other words, the iPad on the surface is really very much like a big iPod Touch (or iPhone). However, the simple fact that the device has a bigger screen opens up a whole new world of possibilities.

The fact that the iPad is like an iPod Touch or iPhone is good because many people already know how to use these devices. This means that for many people there will be no learning curve for the iPad. But regardless if a user has previously used an iPod Touch or iPhone, the Touch OS is extremely easy to learn. So basically using an iPad is just like using the aforementioned devices. It’s all touchscreen with a single home button, along with power and volume buttons.

But with a 9.7 inch display, the iPad is a much more functional device. Things like web browsing suddenly take on a whole new experience. It’s very hard to describe, but the iPad just feels natural to use. Sitting on the couch web browsing with the iPad is so comfortable that I now find it awkward to sit with my laptop anymore. The touchscreen interface, at least for tasks like web browsing, feels more intuitive to me than a keyboard and mouse. And the fact that you can hold the iPad fairly close to your face makes the screen feel a lot bigger than it actually is.

Reading on the iPad is very pleasant. This is crucial because the iPad has the potential to revolutionize the publishing industry. The long awaited promise of technology to reduce the amount of paper we use may finally become a reality. It is entirely conceivable the iPad and future devices like it will become the dominant method people use to read books, magazines, and newspapers. Given that people will be reading on an interactive touchscreen device, indeed the entire concept of what books, magazines, and newspapers are could even change. Imagine students carrying one iPad instead of a backpack full of textbooks. The electronic book aspect of the iPad alone could change the world.

However, where I think the iPad will really make an impact is in the way we use computers in the home. I have been calling the iPad the first “coffee table” computer. For as far as personal computers have come along, they are still basically tied down to desks. Even laptops are not as portable as most people would like. The iPad changes all this. The device is so small and light and its battery life is so long, that I predict the iPad will be entirely more accessible to family members in a home. As many things in a home, it will find a place on the living room coffee table and it will migrate around the house as necessary. Because the price is so low, I also predict that many homes will own multiple iPads. This will go very far in meeting the ever increasing demand of computing in homes. For the price of a single good laptop or desktop, a family could purchase 2 or 3 iPads which will likely fit the needs of most family members and give them all their own iPad to use.

Because this device could change so much in the computer industry, I recommend that you test drive an iPad as soon as you can, especially if you are considering a new computer purchase in the near future. For all that you can read about the iPad, there is no substitute for actually getting your hands on one. If you know someone that owns an iPad, try using it while lounging on a couch or recliner. I promise it will change the way you think about interacting with computers.

If you’d like to test drive an iPad, visit the MacXprts store in Edwardsville, IL. There are 3 models on display so you should be able to spend as much time as you’d like with one.