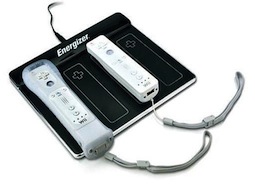 I have written about inductive chargers before but it has been a long time since I had seen any new developments in this technology. I had begun to think that inductive charging was not going to gain significant traction in the marketplace. But that was before I discovered the Energizer Flat Panel Induction Charge System for Wii. Now here is an excellent use of inductive charging technology in a product that very much hits the mainstream user.

As with other inductive chargers, charging occurs simply by laying the device on a special induction charging pad. In this case, you simply lay the Wii controller down on the pad. There is no need to plug the controller in, take out batteries, or make sure that any contacts are touching. In simple terms, the device charges wirelessly. Besides the simple fact that wireless charging is just a really cool idea, there are a couple of highly relevant uses in regards to Wii controllers.

Second, most Wii controllers now come with a protective silicone sleeve as a safety feature. It provides extra grip and some cushioning for the controllers. However, this sleeve is a bit of a pain when it comes to swapping batteries because you must partially remove the sleeve to get to the battery compartment. Again, if you have kids this really becomes a pain. However, because inductive charging is wireless, it works even if the Wii controller has a protective sleeve over it. Again, simply laying the controller on the pad will charge it. This also holds true if the controller has a Wii Motion Plus attachment. So simple!

The Energizer Flat Panel Induction Charge System for Wii comes in models that can charge either 2 or 4 controllers at one time. Energizer calls them the 2X or 4X models. Compared to other inductive chargers on the market, I found the prices of the Energizer chargers to be extremely reasonable. The 2X model is around $30 while the 4X model costs around $50. Because I believe most Wii owners have more than 2 controllers (or plan on it), I would recommend the 4X model in most instances. For the price, you get the induction charging pad and either 2 or 4 induction battery packs. The battery packs replace the rear battery cover and include an external button that pushes through to the internal sync button on the Wii remote. This actually makes syncing a Wii remote easier!

Please be aware that Energizer had previous induction chargers on the market. They did not receive very good reviews. However, from what I’ve read the new flat panel chargers are getting high marks. So if you are shopping around make sure you are looking for the “Flat Panel” models. It should be easy to find the Energizer Flat Panel chargers because they are sold at places like Wal-Mart and Best Buy as well as many on-line retailers. However, take note at the time of this writing it appears that Best Buy only sells the 2X model while Wal-Mart sells both the 2X and 4X models.

If you have any questions on this or any other technology gadgets, please contact me today!