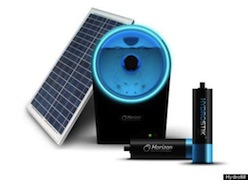 There has been much talk about using hydrogen as a fuel. While it still may take quite a while longer to see widespread use of hydrogen as a fuel for cars, we may actually see hydrogen as a fuel for small electronic devices fairly soon. The HydroFILL and HydroSTIK were featured at the Consumer Electronics Show in January. At the time the devices were to released later this year. While it does not appear the products have been released yet, in anticipation I think they make a good Tech Toy of the Month.

If commercially successful, products like these that can use hydrogen as a fuel source could save a lot of power, reduce the amount of batteries being thrown in landfills, and reduce air pollution. So let’s keep an eye on this technology and see where it takes us.

If you have questions about this or any other emerging technology, please contact me an I’ll be glad to give you my thoughts.