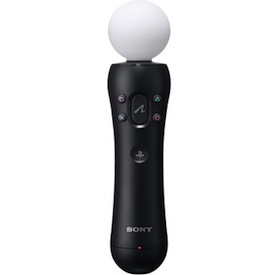 At the time of this writing, the new Playstation Move system has just been launched in the United States. Some of you may have seen the commercials, which I’ve observed playing heavily during football games. Whether you’ve seen the commercials or not, I’m sure most of you are wondering what the Playstation Move system is. Well, lucky for you I am here to explain the details as well as my thoughts and concerns.

For their similarities, the Playstation Move uses different technology than the Nintendo Wii. Sony claims that this gives you a move immersive and realistic gaming experience. Certainly from reading their description of the geeky details, it sounds like it should. Since the Move was just released literally last weekend, there are not yet enough reports to draw a conclusive assessment. However early testers have reported that the system does work very well.

First, the Move controller requires another peripheral called the Playstation Eye, which is basically an existing product from Sony that is like a webcam for the Playstation. The Eye works in combination with the Move controller to precisely track player movement. Again, the technology behind how the Move system works with the Eye is very advanced and interesting to read about. However, to consumers who are purchasing the $50 Move controller and then find out they also need a $40 Playstation Eye, they might not find that so interesting. There is a bundle package available for $100 that includes the Move controller, the Eye, and a game. This bundle should make adding on the Move system easier to an existing Playstation 3, but I feel that many consumers will balk at spending $100 to add motion gaming capability to a system they likely have already spent at least $300 – $400 on. There is also a full bundle package for people who do not already own a Playstation 3 system, which I will touch on later.

Additionally, there is an optional (or not so-optional, depending on the game) accessory called the navigation controller, which lists for $30. While the concept of an accessory controller isn’t new – for example the Nintendo Wii has what they call the Nunchuk accessory – $30 may be a bit steep. The Nunchuk is only $20, and while honestly a $10 difference isn’t all that much, it may be just enough to make consumers pause, especially when they add up the cost of all the other accessories.

In order to stay accurate, the Move system must be periodically calibrated. In reading early reviews, I did read that some people believe this calibration is required far too often. Knowing average technology users like I do, if calibration is required too often, this will slowly but surely frustrate players. Frustration leads to disuse, and if players simply don’t use the Move system very often, it will sit gathering dust in a corner like an old piece of exercise equipment. In order to be successful, the Playstation Move system must gain sufficient acceptance in the marketplace so that game publishers will make more and more games to use with it. If the Move system is frustrating to use, it may have difficultly gaining marketshare.

For customers who do not already own a Playstation 3, you can purchase a complete system with a Playstation Move bundle that includes the controller and the Eye, along with a standard controller and a motion compatible game. The bundle price of $400 is actually a good value considering the cost of all the separate items individually – but $400 is $400. Compare this to the Nintendo Wii which offers a similar bundle for $200 with a game. And again, besides the cost factor, there is the simplicity factor that I described above.The Wii, similar to the Apple iPhone, has seen tremendous success not just because it is a powerful device, but because it is so easy to use. Because of this ease of use, both devices expanded the market for their respective categories beyond the traditional user base. In the case of the Wii, it appealed to people far beyond the relatively smaller market of “gamers”. The more complex setup of the Playstation Move system and distinctions between Move-compatible and non-compatible games may be just enough to limit its adoption.

As a technology expert who also loves video games, I am entirely excited by the Playstation Move. It continues the evolution of motion gaming started by the Wii and added on to by the Apple iOS devices (iPhone, iPod Touch, and iPad). The technology seems top-notch and it could advance the entire market. However, the complexity of the technology, along with its cost, have me worried if the system will gain a significant foothold. With the holiday shopping season approaching, our questions will likely be answered soon after. If enough units sell AND the players’ experiences are good, then we will likely continue to see more Move compatible games for the Playstation 3.

If you have questions about this or any other emerging technology, please contact me an I’ll be glad to give you my thoughts.