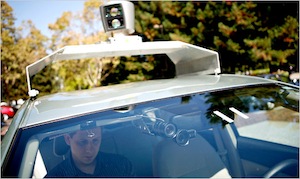 This month’s Tech Toy isn’t really something that you can buy right now, but it is a technology that I have long dreamed about. I don’t think I’m alone as this type of technology repeatedly appears in futuristic movies such as “Demolition Man”, and “I Robot”. Because it is something I am so geeked up about, I thought I’d write about it while the news is hot. So read on to see if one day you too can say, “self-drive”.

Google has been testing automated car technology on the roads of California lately. With a safety driver in the driver’s seat ready to take over in case of emergency, Google’s cars have logged over 140,000 miles and have only been in one accident – and that accident was a human driver rear-ending the Google car.

The Google cars use video cameras, radar sensors, and a laser range finder to “see” other traffic. It also uses detailed map information that Google collects ahead of time to navigate the road. Google says they hope that automated cars of the future could save lives and cut energy consumption. I’m just hoping that I can have my car drive me around so I can use my computer while I’m in the car. I could save so much time! As Wayne Campbell once said, “It will be mine. Oh yes. It will be mine.”