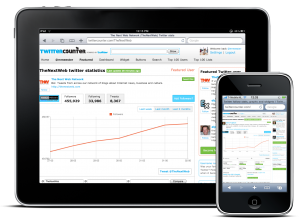 This article is part of my Smartphone and Tablet Buying Guide. Make sure to read that article first, unless you know for sure you want an Apple iPhone or iPad.

Unless you’ve been living under a rock, you know that the Apple iPhone and iPad have completely revolutionized the technology industry. It’s not hard to realize this when you consider that a company which was on the brink of extinction about 12 years ago now has $80 billion in the bank and is considered the largest company in the world.

Apple’s devices have set the world on fire and the reasons are as simple as the devices themselves. People love their iPhones and iPads because they are easy to use, are extremely reliable, and have a huge library of apps they can download and make use of. And when I use the word “love”, I really mean it. Most people I talk to literally say they love their Apple device. I almost never get this reaction from any other technology product, including the devices that compete with the iPhone and iPad.

One of the most common questions I get nowadays is which is the best non-iPhone to purchase. It’s interesting I get the question phrased in this way. It’s usually from people who have Sprint, T-Mobile or another carrier who does not have the iPhone available. The insinuation is that if they could get the iPhone they would, but since they can’t, then they want to know the next best thing.

The short answer is there is no “next best thing”. If you want an iPhone, there is only one iPhone. Sure other phones may superficially look similar. But scratch the surface and you’ll find out why the iPhone is revered by their owners, while other devices are not. In fact, Apple is going through great lengths to point that out with their latest iPhone ad campaign – “If you don’t have an iPhone, well, you don’t have an iPhone”.

If you’re looking to purchase a new smartphone, you should seriously consider changing your carrier to get the iPhone. Rumors are that Sprint and T-Mobile may get the iPhone this fall. But these are rumors, so don’t count on them. However, if T-Mobile gets bought out by AT&T, then likely T-Mobile users will get the iPhone. Still, this may be several months out yet, so don’t hold your breath.

I’ve gotten a few similar questions about iPad competitors, but I get the feeling that most people don’t even realize there are iPad competitors. If they do, they don’t care. The reality is that unlike the smartphone market, where Android devices compete with the iPhone, the tablet market is completely dominated by the Apple iPad.

About the only problem that some people have with an iPhone or iPad is the lack of Adobe Flash support on these devices. It seems most people rarely run into a problem by not having Flash support, but some others seem to be affected by this more often. Apple’s competitors often cite their Adobe Flash compatibility (however flawed it may be) as a competitive advantage. The bottom line is that the lack of Adobe Flash support is a problem that will only continue to get better as web site developers move away from that technology. Already, many major web sites have announced they are transitioning to technology that is compatible with the Apple devices. It’s hard to ignore a market of over 200 million devices that only continue to grow rapidly.

So let’s get down to brass tacks. Which iPhone or iPad is best for you? Let’s start with the iPhone. Right now my advice is pretty simple: wait to see what Apple does in the late September/early October timeframe. I’d hate to see you buy a device right before Apple releases their latest iPhone model, which all rumors point to a new one right around the corner. So wait until then and I’ll be write my updated recommendations at that time.

As far as the iPad, your options boil down to the following:

Between these options, there are 18 different choices of iPad available. But it’s easy to narrow down which option you want as I’ll describe below. Also note that the current iPad model is the iPad 2. If you find an original iPad for sale, it might seem like a good deal, but I highly recommend that you purchase an iPad 2 in most cases.

Capacity can be simple. Each jump in capacity results in a $100 increment in price. For most people, the 16 GB model will be more than plenty. But if you’re the type of person who has a significant amount of music, photos, or video that you’d like to take with you on your iPad, then the 32 or 64 GB model may serve you well. And again, because the iPad can be tough to find at times, you may not be able to find a 16 GB model if that’s what you want. I think for only $100 more, getting double the capacity isn’t a bad deal. So if you want an iPad right away, getting the bigger model may be a good choice.

Connectivity is usually the most confusing option for most people. First off, all the models do have Wi-Fi. Some people think they must choose between Wi-Fi and the 3G service. No matter which device you pick, you’ll always be able to connect to Wi-Fi when you want.

So the first question is should you buy a 3G model? If you know for sure that the iPad will never, ever be used in a situation where the 3G service would be needed, then the Wi-Fi model should be good for you. Often, iPads that are purchased for children, or for use only in a specific location fit into this category. However, increasingly I find that people have the occasional need for mobile iPad Internet use. For example, let’s say a family goes on vacation once or twice a year, or a user travels a few times in a year for business. Because the iPad’s data plans from either AT&T or Verizon do not require a contract, users are free to pay for one month at a time. This flexibility in the data plans means that users can only activate the service when they need it (in monthly increments) and then cancel it until they need it again. The 3G models cost $130 more than their respective Wi-Fi only models, but in many cases I feel the extra money is worth it for the flexibility to activate the 3G service when needed.

So if you decide you’d like a 3G model iPad, then is the AT&T or Verizon service best for you? Note that whichever iPad you pick can only use that specific carrier. So you can’t purchase an AT&T iPad and change it to use Verizon, or vice-versa. Also note that it does not matter which carrier you have for your cell phone service. The iPad data plan is completely independent of your cell phone bill, regardless of which carrier you choose.

The answer to AT&T vs Verizon is not so simple. It completely depends on where you expect to use the iPad with 3G service most often. For example, my first iPad had AT&T service. My new iPad has Verizon service. I did this on purpose so I could compare the two with my usage. For the most part, I haven’t really noticed a difference. Each carrier will try to persuade you that theirs is the best service. But each carrier has their strengths and weaknesses as well as dead zones. The only way to know is to test it yourself, or ask others who have the respective service how well each carrier works for them. The pricing plans are similar between the two carriers, but also check them against your expected usage before making a decision.

If you expect to do a lot of international travel, the AT&T model may be your better choice. AT&T’s network technology is more globally compatible than Verizon’s. Other than that caveat, the choice between AT&T and Verizon in most cases just likely won’t matter. If the specific model you want isn’t available, you probably won’t go wrong with the other.

So hopefully all this information will help you make the best decision for your iPad purchase. As I said, be on the lookout for an iPhone buying guide in about a month or so.