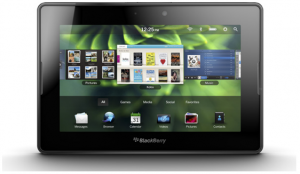 RIM and their various Blackberry devices are well-known, having been the best-selling smartphone on the market prior to the iPhone. However, similar to Microsoft, RIM had to rethink their mobile phone offerings after the iPhone changed the market. So far, they’ve been less than successful.

RIM is still trying to develop a phone that is as user friendly as the iPhone and their selection of third-party apps is quite small. The main problem with the Blackberry is that the platform feels “stuck” in the past. However, RIM is having a hard time breaking with the past for fear of alienating their relatively large installed base (mostly corporate users). Yet at some point they must because their marketshare continues to slip. So prospective buyers are in a sort of limbo, awaiting if RIM will bring out their next big thing sooner than later.

RIM’s tablet offering, the PlayBook, has gotten very poor reviews and is not selling well at all. This bodes very poorly for the company as the operating system that that they are offering on the PlayBook may be what RIM transitions to on their phones. If the PlayBook is a failure in the marketplace, this may not inspire a lot of confidence in the market about future Blackberry phones.

Additionally, RIM as a company appears to be dysfunctional, and it’s not clear they are going to be able to pull out of the tailspin they are in. Given that the future of the company itself is questionable at this time, I must advise that you stay away from RIM’s Blackberry devices for the near future.