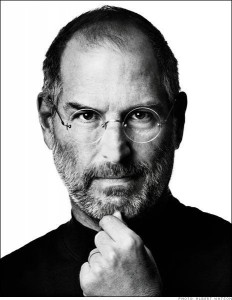 “I want to put a ding in the universe.” – Steve Jobs

Having the reputation of the area’s longtime Apple expert, it was not surprising that I received so many questions what I thought about Steve Jobs and what it meant now that he has passed on. I put off writing this article because I wanted enough time to contemplate – but also because I was honestly not prepared to let go.

No single man has had the impact on the technology world that Steve Jobs has had, at least since the introduction of the personal computer. Nearly every technology that you and I use today – from the mouse, to the PC, to the way we listen to music today, even the phones we use – has the mark of Steve Jobs. No, he didn’t invent most of the technologies that we use. But he either brought them to market first, or figured out how “the rest of us” could best make use of those technologies. Did you know the world wide web was invented on a computer that a Steve Jobs company designed? Without Steve Jobs, even the Internet as we know it today may not exist. Given how ingrained technology is in our world, it is easy to say that no single man has had the impact on our very lives that Steve Jobs has had.

As for myself, my introduction to computers was on an Apple IIe. Apple was widely used in education during the 80’s, and I learned on Apple computers for much of my early life. Since then, my life and career has somehow been intertwined and influenced by Apple and other technology creations by Steve Jobs (NeXT, Pixar). The more I learned and experienced all sorts of different technologies, the more I realized that Apple products were different and special. Apple products have always been known for their ease of use and the fact that they make technology accessible to everyday people. Making technology easier to use and accessible to my clients became the mission of my technology business. It is no stretch to say that Steve Jobs has been the biggest influence in my career.

It can be said that we lost Steve Jobs too soon. But I think that one of the reasons Steve Jobs had such success resurrecting Apple was because he knew that his time in this world was short. Knowing that he only had limited time to perfect and implement his vision of technology in our world, he became super-focused on making this happen. Perhaps we wouldn’t have the Apple products that were introduced in the last 5 or so years without this intense focus. Steve Jobs didn’t waver from his mission and he has now shown much of the world how technology should be – not the tangled mess most of us were familiar with in the 90’s and early 2000’s.

It is incredible what an outpouring of grief and gratitude the world showed when Steve Jobs died. It is clear that he did impact the world in a way that even I didn’t fully grasp. But now that he’s gone, it is up to rest of us to continue his mission. We must continue to push for the best technology possible. We can not allow technology companies to settle for mediocracy. We must continue to make the investment in ourselves to seek out the technology that best fits our lives. We can not allow ourselves to simply accept the technology that so-called experts say is the best for us. Above all, we must understand that technology is much too important to take for granted. If we all commit to take the reins that Steve Jobs has left behind, nothing will be impossible.