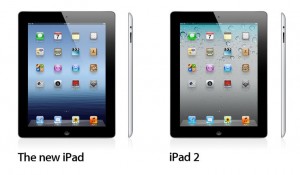 Unless you’ve been living under a rock, you know that Apple has just released the 3rd generation of the iPad, which they are simply calling the “new” iPad. What you may not know, however, is that Apple has kept around the 2nd generation of the iPad, known as the iPad 2, in 16 GB capacity models. In doing so, they have dropped the price of the 16 GB iPad 2 by $100, suddenly making the iPad more attractive to those customers who wanted a lower-priced option. Because of this, many people are asking if they should save the money and purchase the iPad 2, or if the improvements to the new iPad are worth it.

The first important fact to note is that Apple has only kept the iPad 2 in production in the 16 GB models. So unless you can find a 32 or 64 GB iPad 2 on close-out, you will not be able to purchase an iPad 2 in any other capacity besides 16 GB going forward. But since most people are purchasing 16 GB models, the question remains very valid.

To quickly sum up, the main improvements to the new iPad are its high-resolution “Retina” display, a more powerful processor, a better camera, and 4G LTE capability. I’ll take a quick look at each feature to give you an idea of how the new iPad compares against the old iPad.

To me, the camera isn’t really all that big of a deal. It is now a 5 megapixel camera as compared to the previous 1 megapixel camera, it has facial detection, and it now shoots 1080p video as compared to 720p. Yes, it is a very nice upgrade, but I think the camera on the iPad is not a core feature. The upgrade basically makes the iPad camera “good enough” for almost all picture and video needs. Sure there are better cameras on mobile devices out there, but if you’re buying the iPad based on the camera, then you are an odd duck indeed. Ironically, the arguably more important front-facing FaceTime camera that can be used for video conferencing is basically the same. So again, I think the camera just isn’t relevant to most people’s iPad buying decision.

The 4G LTE capability can be very important to those that use the iPad while on the road. But it really doesn’t add anything new to those who use it on Wi-Fi. Because 4G LTE is simply faster Internet and Wi-Fi is already faster Internet. But if you use the iPad away from Wi-Fi networks and speed is important to you, the the 4G LTE capability can be very useful. However, 4G LTE networks are not very widely deployed so even then it may not make all that much of a difference until the carriers expand their 4G LTE networks.

The more powerful processor in the new iPad, the A5X, is primarily needed to increase the graphics performance in the new iPad. This is because the new iPad has 4 times the number of pixels to power. Without increasing the graphics performance, an increase of that many pixels would have caused a noticeable slowdown. It is yet to be seen if the increased performance will make a difference in actual responsiveness in the real world. I predict it won’t be significant because most of the increased performance will be used to power the Retina display rather than overall speed. I could be wrong, but in my initial testing, I did not see a significant difference in speed as compared to the iPad 2.

When all is said and done, the decision to purchase the new iPad or the iPad 2 really comes down to your perspective of the Retina display. First, you should really see each iPad in comparison to each other so you can make a truly informed decision. When it comes to displays, there is no substitute for seeing with your own eyes. Apple calls the display a “Retina” display because they claim the human retina can not discern the individual pixels in this new display. I must agree that I could not see any pixelation in the display across the board, but the most noticeable difference is when viewing text. Rather than looking slightly fuzzy, the text is razor sharp. Again, you’ll need to see it for yourself to appreciate it.

Bottom line, if you need an iPad and need to keep the cost to a minimum, the iPad 2 is a very good choice. But if you are going to use the iPad as an eReader, I highly recommend the new iPad. As well, if you are going to use the iPad for games or want the best possible view of photos and videos, the new iPad is your best bet. This of course, assumes you can find a new iPad. As is usual during the early stages of new iPad releases, Apple can’t make them fast enough and most places are sold out! Contact me if you need help locating an iPad.