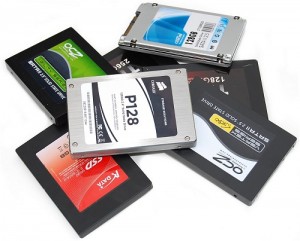 If you normally do not read my Tech Toy articles, be sure to read this one! This Tech Toy is a little different in that I am highlighting not a single product, but an entire class of technology. I am choosing to highlight this technology now because it has finally matured to where it makes sense for average consumers.  And wow, is it a game changer! If you’re interested in getting a few more years out of your existing computer, be sure to keep reading!

First, solid state drives are more reliable than hard drives. With no moving parts to wear out and no magnetic fields that can be distorted to corrupt data, the likelihood of an SSD failing or losing data is many times lower than that of a hard drive. Second, because there is no motor in an SSD needed to spin platters, they use much less power and generate much less heat than hard drives. This allows portable devices to have longer battery life and also run cooler. Just think of the iPad for an example of a device that has long battery life and runs cool. The iPad uses “flash” memory, which again, is basically the same technology that solid state drives use.

But the most appreciable benefit that an SSD gives you compared to a hard drive is speed! Solid state drives can transfer data much faster than a hard drive. With the amount of time that a computer spends accessing and writing data to its drive, the speed difference between an SSD and a hard drive is very noticeable, even with older computers. Computers boot much faster, programs launch quicker, web browsers load pages faster – everything is snappier. This difference is especially noticeable with laptops that have 5400 RPM hard drives. 5400 RPM drives are commonly used in laptops because they use less power and generate less heat (the platters spin slower than 7200 RPM drives). But they are relatively slow drives. Replacing a slow hard drive with a fast SSD can make your old laptop feel like new.

I can personally vouch for this, as I recently replaced the hard drives in my family’s 3 laptops with solid state drives. It definitely made a difference in all 3 laptops. But the most striking change was in my own personal laptop, the oldest of the three. I purchased my current laptop in May of 2007, and it was a model originally introduced in late 2006. Once I installed the SSD, my 5 year old laptop using 6 year old technology has never felt so fast! As I mentioned, everything loads quicker and the computer is just much snappier overall. I had been planning a purchase of a new laptop, but now I’m in no real hurry. It really does feel like I have a new laptop!

SSD technology has been available for several years now. The problem has always been that they were quite expensive. Even today, solid state drives cost a lot more than comparably-sized hard drives. But the good news is that the price per gigabyte has come down enough to where reasonably-sized solid state drives are affordable for average consumers. Since most people only use a fraction of their huge hard drives anyway, a smaller SSD can make sense. If your data usage can fit within a reasonably-priced SSD, the performance benefits are well worth it.

With so many people trying to stretch the lives of their old computers, a solid state drive might be just what the doctor ordered. Contact me for more information about solid state drive technology and I’ll be happy to discuss if an SSD is right for you!