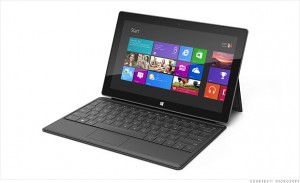 First, while this is a Microsoft device that runs “Windows”, it is not a PC, nor a PC tablet. Yes, the operating system it runs looks almost identical to the new Microsoft Windows 8 – also released today – but it is NOT Windows 8. Instead it is called Windows RT. While Windows 8 is largely compatible with existing PC software, Windows RT will NOT run any of the software you may have on an existing PC. Many people will assume that because the Microsoft Surface has the “Windows” name on it, it is the same operating system (or an upgraded version) their old Windows computer runs. Again, this is NOT the case.

Second, while this is a tablet, it does not have the number of apps that are available on other tablets, namely the iPad. If you’re expecting to play Angry Birds on a Microsoft Surface, for example, you won’t be able to at this time. Compared to other platforms, there are only a fraction of the number of apps available for Windows RT. Given the amount of time developers have had to prepare for the launch of Windows RT, there does not appear to be a groundswell waiting to develop apps for Windows RT. Many are probably waiting to see if Windows RT and/or the Surface gain any real marketshare before they commit to it. Which is exactly what I advise you to do.

At this time, Microsoft’s Surface tablet and Windows RT in general are receiving mixed reviews. The general consensus is that while the technical specs of the Surface are nice and the hardware looks impressive, the software just isn’t ready for primetime. From a usability standpoint there are some noticeable inconsistencies which suggests Microsoft rushed Windows RT to market, but also compared to other tablet platforms, Windows RT doesn’t have many of the features that have come to be popular. Because of these issues, the prudent advice is to wait at least 3 – 6 months before considering a Microsoft Surface, or any Windows RT-based tablet. Time needs to be given to see if the problems can be shaken out and it can be determined if the platform is gaining any market traction. Waiting to purchase anything new from Microsoft has been the commonly accepted wisdom for a long time. On the surface, the same holds true on the Surface.