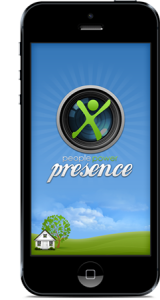 It’s amazing to see just how many old iOS devices people have lying around. The rapid pace of The New World of Technology has relegated  many older iPhones, iPod Touches, and even some iPads to dust-collection status. These devices are often perfectly good but newer devices are just so much faster and offer more features that their owners simply have little need to use their old devices. Selling them is often a pain, so they just sit around unused. Wouldn’t it be nice if you could find a use for your old iDevice and help protect your home or loved ones at the same time? A company called People Power has given you the power to do just that.

People Power has developed a free App called Presence which turns old iDevices into a Wi-Fi video camera that can be viewed from anywhere in the world. Simply install Presence on the devices you want to be used as cameras as well as the devices you would use to view the video feed from. Sign up for an account and log into the account with all your devices. You can then use the App on one device to view the video feeds from the other devices. Since the video feed can be connected from anywhere on the Internet, you can check in on your house anytime and from anyplace you want (assuming you have Internet access, of course). You can also set up motion-detection alerts to inform you when a camera detects motion.

The fact that the Presence App and service are free is nice. But there are some downsides. Obviously, if you don’t have any spare iOS devices, this App doesn’t help you. However, the low price of old iOS devices just might make it worthwhile to buy some for use as video cameras. Also, you will need to find a way to mount the devices and also supply power to them as their batteries will run out quickly. There are options out there that should make doing this simpler, but it does restrict you a bit as to where you can place the iDevice cameras.

Overall, this a good example of putting old technology to good use. So if you have some older iDevices lying around, give the Presence App a try and let me know how it works out for you.