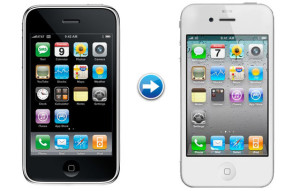 In case you’ve been living under a rock, Apple has introduced their latest iPhones, the iPhone 5S and iPhone 5C. They go on sale at the end of this week so it goes without saying that hordes of people will be replacing their old iPhones very soon. I periodically get asked what is the best way to transfer data from an old iPhone to a new one. With the impending release of new iPhones, I figured now would be a great time to explain how to backup an iPhone and restore to a new iPhone.

One of the great features of Apple’s iOS – the operating system on the iPhone, iPad, and iPod Touch – is its backup and restore capability. Not only can you backup your current iPhone in case of trouble, but you can also restore the backup to a new iPhone. This is very useful in case you lose your old iPhone and need to replace it. But it is also very useful when you buy a brand new iPhone. Instead of reconfiguring all your settings and apps, you simply restore from the last backup and your new iPhone will be configured virtually identically to your old one. In case you’re curious, this process also works for iPads and the iPod Touch. In fact, it also works across different types of iOS devices. So, for example, if your child was upgrading from an iPod Touch to an iPhone they could follow the same process.

In order to completely backup your iPhone, you must use Apple’s iTunes software on your Mac or Windows PC. While you can backup using iCloud, it is not as complete of a backup. If you have a Mac, iTunes is already installed. If you have a Windows PC, you may have already installed it, but if not you can download and install it from Apple’s web site. For the details of the backup and restoration process, I’ll point you to Apple’s support article on how to backup to and restore from iTunes. Make sure you follow the steps for iTunes, not iCloud. I also have a few more recommendations when backing up for restoring to a new iPhone.

First, when backing up with iTunes, you want to make sure you check the box that says “Encrypt iPhone backup“. The key here is that for security reasons an iPhone backup will NOT backup your passwords UNLESS you encrypt the backup. It is a bit of a pain to be prompted for all your passwords when you start using your new iPhone, so I highly recommend encrypting your backup to avoid this issue. When choosing this option you will be prompted to create a password for your encrypted backup which you will need to remember when restoring to your new iPhone. So make sure you do NOT forget this password as there is no way to restore your data if you forget this password. However, Mac users will have the option of storing the password in their Keychain which will remember the password for them.

Second, I recommend upgrading to the latest iOS version on your old iPhone before backing up and restoring to your new iPhone. I say this because your new iPhone will have the latest iOS version out of the box. While it likely won’t be a problem if your old iPhone is running an older iOS and you restore to a new iPhone with the latest iOS version, experience has shown that the smoothest transition is ensured if the backup is restored to the same iOS version. Generally speaking, upgrading your iOS version is very easy to do, as it can be done right from the iPhone. Here is the link to Apple’s support article explaining the simple iOS upgrade process. Just give yourself about 30 minutes where your phone will be upgrading and you won’t be able to take calls. The trick is that Apple generally releases a new iOS only a few days before they release their new iPhones. This year is no exception. So if you want to get a new iPhone on the day they are released, you need to make sure to update your old iPhone as quickly as possible. Apple is set to release iOS7 on Wednesday, September 18th, two days before the new iPhones go on sale. If you aren’t comfortable with upgrading your iOS, then I would say skip this step, but I wanted to make sure you have this information.

When backing up your iPhone to iTunes, the longer you take between backups, the longer each backup will take. So I recommend doing a backup a few days before you intend on buying a new iPhone, then following up with one last backup right before you go out to buy your new iPhone. Then you need to return home to restore your iPhone as soon as possible to return your iPhone to normal operation and get access to your contact information. Obviously, if you have your iPhone shipped to you, then you can perform these steps at your leisure.

Finally, if you are following this process (which I strongly suggest you do), and you purchase your new iPhone from your wireless carrier’s store, there is no need to have your salesperson transfer your contacts. Generally they ask if you want your contacts transferred as a courtesy, which is very nice, but since you have a full backup waiting for you there is no need for them to do this. It will save you some time and help you get out of a crowded store sooner.

So if you’re buying a new iPhone, don’t worry about needing to reconfigure all your settings. Simply back up to iTunes following my advice and you’ll be up and running as quickly as possible!