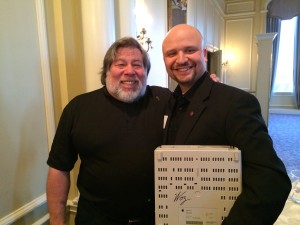 Steve Wozniak on the left, Marcel Brown on the right, and the Apple IIgs with Woz signature.

Back on January 28th, I was lucky enough to personally meet Steve Wozniak, a living legend in the technology industry. First a shout out to Cathy and Jack Davis of Davis Creative for giving me the heads up that Steve Wozniak was holding a special reception while he was in town to give a speech. I would have likely not known otherwise and missed out on the opportunity. For those of you that may not be aware, Steve Wozniak was co-founder of Apple Computer, along with Steve Jobs, and was the primary designer of the Apple I and Apple II computers that ignited the personal computer revolution. The first real computer I ever used was an Apple IIe and I spent most of my early years learning computer technology on various Apple II series computers. So to say that Steve Wozniak was influential in my life is an understatement. Meeting such an important person in the history of the technology industry was an absolutely incredible experience.

Wozniak primarily gave a little talk, answered some questions, and then shook hands with people and signed autographs. I even managed to get him to sign my old Apple IIgs computer!

Here are some highlights of what he spoke about that evening.

As a technology professional and a technology enthusiast, meeting one of the men who ignited the personal computer revolution was an experience of a lifetime. Below I share a few pictures and video of the event. I hope you enjoy them!

A picture of the Steve Wozniak reception poster.

I’m about to meet Steve Wozniak. Can you tell I’m excited?

Here’s my Apple IIgs that I wanted Steve Wozniak to sign. It was quite the hit among the techies in attendance!

This was my view of Steve Wozniak speaking

Another view of Wozniak speaking