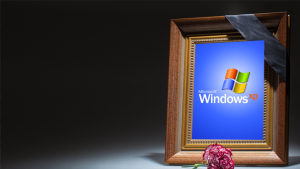 This is the third in a series of articles discussing the “End of Support” for Windows XP. Please read the first article and the second article if you haven’t already.

If you’ve read the first and second article I wrote about the End of Support for Windows XP, you should be up to speed on what the ramifications are if you wish to continue running Windows XP. For many, continuing to run Windows XP may be the right choice. But for others, this may be the time to move on to a new computer. But moving to a new PC isn’t as simple as it used to be (was it ever?). There are a few things to consider.

The first thing to do is NOT assume that you must buy a Windows computer just because you are moving from Windows XP. The technology world has changed a lot since you bought your Windows XP machine and Windows is no longer the de-facto standard for small businesses and individuals. For many people, the change from Windows XP to a new version of Windows is enough of a mind-bending experience that they might as well look at other options. So as you consider your options, don’t exclude the idea of a Macintosh computer or even an iPad replacing your old Windows XP PC. I’ll talk more about these options throughout this article.

One of the complications of buying a new PC is that the specter of Windows 8 looms out there. Most new Windows computers come with Windows 8 pre-installed, especially at big box technology stores. I probably don’t need to tell you that many people absolutely hate Windows 8, so it would be best if you had some experience with Windows 8 before running out to buy a new PC. If you have no issues with Windows 8, then you have a wide selection of devices available. If you don’t want to use Windows 8, you can buy a Windows 7 PC on-line from companies like Dell and HP. And of course, as I mentioned above, you can also choose a Macintosh computer.

For many, the idea of a Macintosh computer seems very foreign, especially if they’ve been using Windows XP for many years. At the time of Windows XP’s launch, the technology world was filled with many more incompatibilities than there are now. With today’s technology, Macintosh computers (as well as other devices) are capable of using most data that originated on a Windows computer and can even run most of the same software that Windows computers can. If necessary, Macintosh computers can even run the Windows operating system itself, ensuring that it can run all Windows software as well as Macintosh software. The ability to run all this software is one of the big advantages of using a Mac, along with being virtually virus-free and, of course, being known as the world’s most user-friendly computer. I could go on and on about this topic, but the bottom line is to not dismiss purchasing a Macintosh computer based on old preconceptions. I’m willing to bet that many of the old ideas you have about a Macintosh are no longer valid. You may miss out on the chance to upgrade your computing experience if you assume a Macintosh won’t work for you or switching would be hard. Ironically, many people find that switching to a Mac is easier than switching to a Windows 8 PC.

Regardless if you buy a Windows 8, Windows 7, or Macintosh computer, there will be some conversion hurdles. The most common problem is that software programs installed on an old Windows XP PC will not directly transfer to a new computer. While data files are simple to copy to a new computer, software programs must be properly reinstalled from the original installer. If the software is too old it may need a new version purchased or downloaded. Usually this isn’t too big of a problem. Either people have kept their original installation media, or they can simply purchase or download their new versions. However, sometimes it is very difficult for people to reinstall their old software on a new computer. Perhaps they lost their installation discs or the software is no longer made for new computers. This poses a bit of a problem but there is a solution.

Regardless of the type of new computer purchased (Windows or Mac), it is possible to run Windows XP in what is called a “virtual machine”. A virtual machine is software that emulates a physical computer, allowing an operating system to run “inside” another. For the purposes of a Windows XP transition, it is possible to “clone” your old PC into a virtual machine in your new computer. Think of it like taking the “brain” of your old physical computer and transplanting it virtually in your new computer. Your old computer lives on inside your new computer, running identically the way it was before. This allows you to migrate to a new computer while still virtually retaining the use of your old PC. I’ve done a lot of transitions of old Windows XP computers to new computers this way over the last several years and it generally works out really well for the user, especially if they are transitioning to a Macintosh. This works out especially well for users who have old specialty software that is no longer supported for use on any new computer. It allows them to continue to use their old speciality software indefinitely, while making use of the new software on their new computer for everything else.

Finally, for the way many people use their computers, they may not need to purchase a traditional personal computer. For many people, an iPad works better for them than a traditional personal computer, be it Windows or Macintosh. If you are the type of person who primarily only surfs the web and uses e-mail, then you should consider an iPad. Being relatively inexpensive as compared to a quality new personal computer, the iPad’s mobility and ease-of-use lends itself to the basic computing tasks that most people do most often. Paired with an external keyboard, the iPad even works out very well for those who need to do more typing than average. Plus the number of apps available for the iPad make it extraordinarily powerful. I’ve observed many people who have opted to buy an iPad and keep their old personal computer around for sporadic use instead of simply buying a new personal computer. This way they still have their old computer around “just in case” while gaining the advantages of a new iPad. If you haven’t considered that an iPad could replace your old Windows XP computer, make sure you get a chance to use one before committing to any purchase decision.

The moral of the story is to not make any assumptions when considering the purchase of a new computer. Since you have a Windows XP computer, it is safe to say that there have been tremendous changes in the technology landscape since you purchased your current computer. All options are on the table, including retaining the use of your old PC in one form or another. Do some research and ask questions so that you have as much information available in order to make an informed decision. Feel free to contact me, but do so quickly – April 8th is just days away!