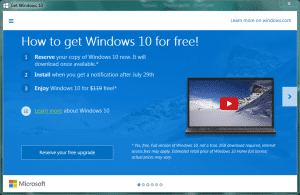 If you are like most busy people, you have little time for dealing with complicated technology upgrades. Therefore you probably have little interest in reading an article about the next version of Microsoft Windows, known as Windows 10. However, I highly recommend that you do read this article because Microsoft is going to make it hard to ignore this upgrade and if you aren’t careful, you just might find yourself installing Windows 10 whether you like it or not.

You might have already heard of Windows 10 – if for no other reason than Microsoft skipped the number nine, oddly jumping right from Windows 8 to Windows 10. However, if you’re like most people who use Microsoft Windows, you probably have no intention or desire to install a Windows operating system upgrade. History shows that most people only upgrade Windows operating systems when they purchase a new computer. This is for two main reasons. First, Microsoft has always charged for Windows upgrades. Second, most people have a natural inclination to leave well enough alone. They simply have no motivation to go through the hassle of a major operating system upgrade.

Microsoft seems to caught on to the fact that most people do not undertake Windows operating system upgrades. With Microsoft steadily losing their relevance in a mobile device-dominated technology landscape, they seem very eager to get as many people on board with Windows 10 as possible. To start, Microsoft is giving away Windows 10 to all people who are running legally licensed copies of Windows 7 and Windows 8 (but only for the first year – more on that later). Additionally, Microsoft is making upgrading to Windows 10 a part of the Windows Automatic Update function that installs patches and bug fixes. So for many people, upgrading to Windows 10 will be free and they won’t need to do anything more than running an update they download. However, for as easy as Microsoft is making upgrading to Windows 10, the question is should you do it?

To Upgrade or Not To Upgrade, That is the Question

From a practical perspective, it is always a good idea to wait awhile before installing any major upgrade. Windows 10 should be no exception. Given Microsoft’s long track record, there are almost always numerous bugs and issues on day one of an operating system release (or as in the case of Windows Vista, excessively numerous bugs). The old adage, “if it ain’t broke, don’t fix it,” is worth heeding when considering Windows upgrades. However, given the universally negative opinion of Windows 8, there are a significant number of people who are chomping at the bit to get back to a more traditional Windows interface. With Windows 10, Microsoft is basically admitting that the experiment with the Windows 8 interface was a bust. So Windows 10 looks more like Windows 7 in its default startup mode. This should make a lot of people happy, as well as the option to get the cheap Windows 10 in Australia to upgrade from the prevous version. However, even given that attraction, I still say wait on the Windows 10 upgrade until enough time has passed that most of the initial problems have been dealt with. How long is that? It depends. I would say at least 3 months, but maybe more. We’ll see starting on July 29th, when Windows 10 is officially released. Stay tuned to this blog and I’ll keep you informed.

Lead Us Not Into Temptation

This is the Windows 10 Upgrade Notification icon

Microsoft is “advertising” the upgrade to Windows 10 by installing an icon to the task bar (in the lower right corner of the screen). Called “Get Windows 10” or “Windows 10 Upgrade Notification,” when clicked it will inform you how to get Windows 10 for free. This process is nothing much more than “reserving” your upgrade by entering your e-mail address. This icon is installed as part of a normal Windows automatic update cycle, assuming the computer is properly licensed and meets the system requirements. If you use Windows 7 or Windows 8.1, you likely will have this icon by now, assuming your computer runs updates automatically or you run them manually.

Microsoft has never promoted a new operating system upgrade like this before, has never offered an OS upgrade for free, and has never made a major OS upgrade part of the automatic update process. My fear is that many people will mistakenly run the Windows 10 upgrade without being certain what they are getting themselves into. Beyond the possible technical issues that may ensue, even if the upgrade is technically successful many computer users would be stymied by such a significant change to their user interface as Windows 10 will bring to Windows 7 or Windows 8 users. 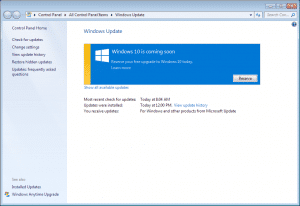 If you see this in your Windows Update screen, what is your first inclination?

I’ve dealt with a similar situation before with users of Apple’s Macintosh operating system. Apple made it virtually too easy to upgrade to the next version of their operating system with their App Store update system a few years ago. I’ve had numerous clients inadvertently upgrade to a new Mac operating system since it appears to be part of an routine update cycle. Luckily most Mac OS upgrades are fairly painless, but the opportunity for issues still exists. I had a few clients get bit by compatibility problems with older software or had pre-existing issues that caused the upgrade to fail and their Macs to malfunction. With the larger number of Windows users, along with the significantly broader chance for compatibility or system issues on Windows systems, I’m very concerned that we are about to witness a tidal wave of frustrated computer users in the next few weeks. At this point we don’t know for certain that Microsoft will make it easy for users to inadvertently upgrade, but it’s better to warn Windows users now than wait as it may be too late by then.

Kids and Employees Might Be a Thorn in Your Side

Even if you are fairly certain that you will be careful and not upgrade to Windows 10 inadvertently, a lot of us have kids or other family members that might not be so careful (or think they are being helpful). Talk to them to let them know that it is best to wait to upgrade to Windows 10.

Business owners also have a lot to worry about. If you own a business and your Windows computers are not centrally managed (most small business computers are not), your employees will be getting the notifications to upgrade to Windows 10. If any do decide to upgrade, it could cause issues with your computers. Again, this simple upgrade scenario has never happened before with Microsoft Windows, so it is an entirely new situation we are dealing with. Time will tell if this will be a big problem for business owners.

Given all the potential problems, the good news is that there is a simple way to disable the possibility of an inadvertent Windows 10 upgrade. If you want to ensure that your computer won’t tempt users to upgrade to Windows 10, you can uninstall the Get Windows 10 app, as detailed by this article.

Free* (But Only for a Limited Time)

One of the unusual strings attached to Microsoft’s offer of a free upgrade to Windows 10 is that it must be done within one year of its release date. If a company is making an upgrade free, why put a time limit on that offer? The reason is likely very simple, as Microsoft wants a few things to happen with Windows 10. First, they want to get away from the publicity nightmare that was Windows 8. Microsoft desperately needs a success to get themselves back on track. If they can point to a large number of people upgrading to their latest operating system, this could be a great PR opportunity. Secondly, Microsoft is a distant third place in the mobile device market behind Apple and Google. One of their biggest problems is the lack of third-party apps for their mobile platform. Developers aren’t too interested in creating software for a platform without a sizable number of users. Windows 8 did not deliver the base of users Microsoft had hoped for and Windows 7 is not part of their mobile platform. Microsoft hopes to get a large and unified base of users on their mobile platform with Windows 10. Given the speed that the mobile device market is moving, the sooner the better for Microsoft. If they do not quickly get a large number of users on Windows 10, they may face permanent irrelevance among smartphone and tablet buyers. If “free” is the carrot, limiting the offer to one year is the stick. So we must ask, is the free Windows 10 upgrade really for the benefit of users, or for the benefit of Microsoft? Bottom line, if you really do not want to upgrade your version of Windows, don’t do it. *Free really isn’t free if you end up having problems. Lost productivity and paying someone to fix your computer aren’t worth it if you don’t see any real benefits from Windows 10. And I have a sneaking suspicion that Microsoft will lift the one-year limitation at some point.

Windows 10 is what Windows 8 Should Have Been

After everything you’ve just read, you probably think I have a negative impression of Windows 10. The reality is that I think Windows 10 is actually a pretty decent version of Windows. Microsoft has made an extensive testing program available to anyone who wants to evaluate Windows 10 prior to release. I’ve been using Windows 10 on a test computer for a couple of months now. While I definitely still prefer Apple’s Mac OS X, Windows 10 is overall a much easier system to work with than was Windows 8. It brings back a lot of the familiar user interface elements that Windows users liked from Windows XP and Windows 7, while retaining some of the nice touches of Windows 8. Under the hood there are claimed performance improvements (which won’t be complete until official release) and various new features that sound good (of course, we’ll see how well the final implementations actually work). So overall, assuming Windows 10 is reliable, I actually endorse the upgrade to those who want to take advantage of the new features and benefits (after my recommended waiting period, of course). Just to reiterate, my main concern is that due to Microsoft’s promptings, users will be upgrading to Windows 10 inadvertently, without full knowledge of what they are doing. If you are fully knowledgable about what a Windows 10 upgrade entails, then by all means proceed when you are ready.

If you have any questions about Windows 10 and what it could mean for your technology, please do not hesitate to contact me right away.

Prior to reading this article, had you heard of Windows 10? Have you received the “Windows 10 Upgrade Notification” icon and have you clicked on it?