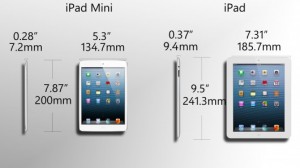 A: The iPad Mini is available for pre-order today, and already I’ve been asked by several clients if they should buy an iPad Mini or stick with the “normal” sized one. The answer to this question is both simple and complex. It completely depends on what you would like to do with the tablet devices. I’ll try to answer this as succinctly as possible.

The fact that the iPad Mini is smaller (and cheaper) means the iPad Mini will be a great tablet for kids (and parents who are trying to save money). I expect that children will be a core market for the iPad Mini, and if you were considering an iPad for your kids but were waiting for something less expensive, your wait is over. As compared to other competitor tablets, if you are buying your kids a tablet because you would like them to use it for homework or at school, there is no substitute for an iPad. The iPad Mini (or current iPad for that matter) is head and shoulders above any similarly-sized competitor.

The current iPad models are extremely portable as compared to most laptops. However, for some people, they are still just a little too big to be comfortably portable. The iPad Mini will fit in nicely for people who want a more portable iPad. Because of this, I’m sure women (who carry purses) will be another huge market for the iPad Mini.

That being said, the smaller screen will have some drawbacks. The simple fact that there will be less surface area means that doing things like web browsing or reading e-books will feel a little more constrained as compared to a larger iPad. Playing games may be a little easier (or fun) on a bigger screen. For many, this won’t be an issue. But for people who are – or will be – heavy users of their iPads might benefit from a larger screen.

In further regards to the screen, the iPad Mini does not have a Retina Display like the current iPad model, which means its screen will not be quite as sharp (note: the iPad 2 which is also still for sale also does not have a Retina Display). The difference may not be quite so noticeable, however, because the screen is smaller which means that the pixels will be “tighter”. The difference in resolution will need to be seen in person to make a definitive conclusion, but I suspect that for many people, it won’t matter anyway. Other factors will be more important in their purchase decision.

Finally, the processor in the iPad Mini isn’t as fast as the processor in the current iPad. It is the same processor as the iPad 2. For some people this may be important, but for most people I don’t expect this to be a noticeable issue. If you are the type of person who would be concerned with raw performance of an iPad, you’ll be doing your own detailed research, I’m sure.

I’d be happy to answer any other questions you have about iPads or tablets in general, so don’t be shy! Comment below or send me an e-mail.

Posted in Tech Q & A