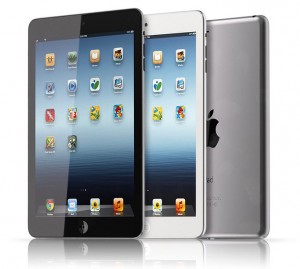 I recently answered the question if one should purchase an iPad Mini or stick with a larger iPad model. Read it if you haven’t already to get an idea if the iPad Mini is right for you. That being said, given the huge potential market for the iPad Mini, especially kids, I predict the iPad Mini will be a hot seller for the holidays – and beyond. So let’s take a closer look at this Tech Toy of the Month.

To a large extent, the iPad Mini is exactly what it says it is – a smaller iPad. But Apple went to some lengths to make the iPad Mini a worthy complement to the existing iPad model for those who wanted a smaller device. The most obvious difference between the iPad and other tablets in the 7″ category is that Apple’s screen is almost 8 inches (7.9 to be exact), where other tablet screens in the 7 inch category are in fact closer to 7 inches. By simply looking at a tablet such as the Amazon Kindle HD next to an iPad Mini one can see the difference right away. While both tablets are almost identical in physical size, the iPad Mini’s screen takes up almost the entire surface area, where the Kindle has a lot more bezel around the screen. So for people who wanted a physically smaller tablet, the iPad Mini delivers the 7″ form factor perfectly while offering a more spacious screen and user experience than competitors.

The other most noticeable feature of the iPad Mini is its incredibly thin and light design. For people who wanted a smaller iPad, the fact that it is also thinner and lighter is a welcome bonus. Additionally, even though the iPad is physically smaller, which means there is less room for a battery, the iPad Mini still gets 10 hours of battery life, just like its bigger sibling. Finally, all 275,000 existing iPad apps work without modification, and of course, existing iPhone apps work in pixel-doubled mode, just like in the bigger iPad.

I mentioned in my last article that the iPad Mini does not have a Retina display like the third and fourth-generation larger iPads. I also mentioned that I didn’t think it would make a difference for most people. Now that I’ve had a chance to review an iPad Mini personally, I stick with that assessment. One possible exception may be for reading eBooks. I can tell that there is a little fuzziness around the text that is not present on a Retina iPad. To reiterate, for most people the lower resolution will not be an issue. Only those people who are going to do a lot of eBook reading and want the sharpest possible text will notice that the Retina display is better for them.

Overall, the iPad Mini is representative of the attention to detail and high-quality design of all Apple products. While a little more expensive than some other 7″ tablets, it is significantly less expensive than the larger iPads. This lower price point for a real iPad will probably be enough for people who wanted a less expensive iPad to make the purchase. The lower price also makes the iPad Mini a lot more reasonable for parents to purchase for their children, especially since the iPad is being used more and more for educational purposes. This extremely large market should make the iPad Mini a hot seller, so don’t wait too late to purchase one if you want to give it as a gift.