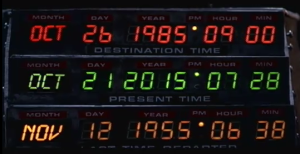 As we approach the end of the year, many of us go into evaluation mode. We look back at the year and figure out what we did well and what could use improving. As a technology professional, I encourage everyone to consider what they can do to improve their technology situation going into a new year. The speed that technology changes necessitates that smart business owners (and individuals as well) review what new technologies are available and what older technologies are becoming obsolete. As we begin the transition into 2015, we should pay careful consideration to one particular technology change that could significantly impact us going forward.

To understand why this shift is so important, we simply need to review the last two years of technology news. In the area where I live, in early 2013 Schnucks supermarkets was the first major example of security breach resulting in the compromise of millions of credit card numbers. Late last year Target was the next big victim. This year Home Depot was the first big name, followed recently by Kmart. Along the way, other well-known companies such as Nieman Marcus, Dairy Queen, Michaels, and PF Chang’s were also hit. From my research, thousands of other smaller companies may have also suffered credit card compromises. Major examples also can be cited in other countries around the world. Why have so many businesses been hit in the last couple of years? Is there a common thread? In fact, there is.

The method of attack in every single one of the well-publicized data breaches was a malware infection. But deeper than that, the common vulnerability was the operating system used by all of these companies for their point-of-sale terminals. Yes, the Achilles heel for every single example was Microsoft Windows. When it comes to malware, there is no more fertile breeding ground in existence than Microsoft Windows.

Besides the highly publicized credit card data breaches, another disturbing trend in the last two years was the rise in Ransomware. Malware authors devised methods to encrypt victim’s data so that they could not retrieve it without paying a significant ransom. The best known example of this was the Cryptolocker malware. This type of attack affects not only businesses, but individuals as well. Once again, the only operating system that is vulnerable to this type of malware infection is Microsoft Windows.

Perhaps it is obvious by now that my recommendation for the most important technology shift you can make in 2015 is to eliminate Microsoft Windows from your technology usage. But I can already hear the panicked screams coming my way. We’ve been with Windows for so long, how could we ever get away from it? Am I crazy? However, before you go off the deep end, allow me to enlighten you.

There are still a lot of companies and people out there who have not shifted away from Microsoft Windows for a variety of reasons. One of those perceived reasons has been cost. True, any major change in technology involves cost, but the question now is can you afford NOT to switch away from Microsoft Windows? Ask Schnucks, Target, Home Depot, or any of the other companies affected just how many hundreds of millions of dollars using Microsoft Windows has cost them. Or ask anybody who had to pay hundreds of dollars in ransom to criminal organizations to get their data back, on top of the cost to clean their PCs from Cryptolocker.

I can hear the grumbling from other technology experts who claim that no platform is truly immune to malware. From a theoretical perspective, I agree. There is in fact no 100% safe technology system. However in the real world, we can look at example after example of just how bad it is for users of Microsoft Windows compared to users of any other operating system. Other operating systems, while they may have their security issues here and there, are no where near as vulnerable to malware as Microsoft Windows has proven itself to be. To say that the amount of malware that exists for Microsoft Windows dwarfs the number for all other operating systems combined is just scratching the surface. Doesn’t it make sense to move away from a platform that is known to be a haven for criminal malware to another platform that has nowhere near the vulnerabilities?

Usually the other argument made against moving from Microsoft Windows is that other operating systems are simply not popular enough to have yet gained the attention of criminals and therefore are going to be just as vulnerable in the future. I’ve debunked this argument so many times it grows tiresome and to fully explain it would require another article in itself. But let me sum it up for everyone here: Due to the superior core security designs of most other operating systems, malware simply can’t be created in the same way that it is for Microsoft Windows. Most other operating systems (or at least their basic cores) have been in existence for at least 15 or more years and malware authors have had ample time to attack them if no other reason than to prove they could. Aside from some minor examples that could cause very little damage, most other operating systems are virtually malware-free. Arguing that other systems are just as vulnerable as Windows shows a lack of understanding of the underlying technology and the situation at large. Along with Microsoft Windows, it is time to retire this argument in 2015 as well.

Let’s think about the situation from another perspective. If many large corporations with massive technology budgets and highly sophisticated security infrastructures couldn’t keep out malware that compromised their point-of-sale systems, what chance realistically do most of us have in keeping our Microsoft Windows systems free of malware? Reading any common advice for keeping your Microsoft Windows system secure almost always involves using your PC with a paranoid mindset. Literally, there is much advice out there that suggests limiting the use of your Microsoft Windows PC in order to keep it and your data secure. What is the point of using a computer where one must be constantly vigilant for attack and resign oneself to limited use for their own protection? Especially considering there are other platforms readily available where no such paranoia is necessary.

While some of us may truly be in positions where we will be stuck with Microsoft Windows for a while longer, the worst thing we can do is to pretend the problem doesn’t exist. Ignoring the issue only works as long as you are not a victim of the next major malware attack. It is now time to take the necessary steps to reduce your exposure to malware, which means reducing your dependence on Microsoft’s malware magnet of an operating system. Even if you can’t completely eliminate your use of Microsoft Windows at this time, anything you can do to reduce your usage now now while planning for your eventual exodus will be in your best interest.

I predict that sometime in the future, people will look back at the PC era and be perplexed as to why we put up so long with an operating system that was this incredibly vulnerable to malicious software. I hope that future comes sooner than later and you can help make that a reality starting in 2015. But certainly this task is not something that you should pursue alone. There are many things to consider in such a migration and it is easy to let something slip through the cracks if you are not a technology professional. Please consult with a trustworthy technology professional who is well-versed not only in Microsoft Windows, but also the range of other technology options available in this post-PC era. I’m certainly happy to answer your questions and help you develop your own plan to migrate away from Microsoft Windows, as I have done with many clients over the last several years. Feel free to contact me today if you have any questions or concerns.