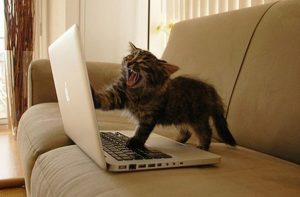 Slow Internet speeds make even cute kittens angry. You don’t want to anger a cute kitten, do you?

Almost four years ago I wrote an article about high speed Internet services and the inability of some network equipment to keep up. That has been one of my most popular articles ever, generating over 200 comments and questions. Clearly people are frustrated by slow Internet speeds. At the time, the baseline residential bandwidth had been increased to 100 Mbps in my area. Since that time, it has become possible to get 1000 Mbps (gigabit) service in certain neighborhoods in my area and just recently, the local cable provider increased their baseline residential service to 200 Mbps. As such, I felt it was time to revisit this topic.

For many people with older networking equipment, they may not have been getting the full 100 Mbps they were being provided, but they may have been close – say in the 90 Mbps range. But now with 200 Mbps speeds, if they are only getting 90 Mbps, then they are getting less than half of what they are paying for. Even worse, some people with malfunctioning equipment or older wireless technologies may only be getting a fraction of their maximum Internet bandwidth.

I have observed that as routers get older, the possibility of subtle problems increases. Routers that seem to be working fine may not always provide the best possible throughput or they may seem flaky – and maybe only with certain devices! Or they may work fine under light load, but when kids come home and start hammering the Internet with games and streaming videos, then things start going awry. Various network problems also plague small businesses who often will keep older equipment running well past its prime.

The bottom line is that with the prevalence of very high speed Internet services that are 200 Mbps or more, combined with the increased demand for bandwidth from streaming video services and a multitude of mobile devices, now is definitely the time to review your network to ensure you are getting the Internet service speeds you are paying for. Contact a trustworthy technology professional who has expertise with home and small office networks (such as myself!) to review your current setup for problems that may be restricting the speed of your Internet service. In one example, I helped a client increase his usable Internet bandwidth 10x AND made it accessible from every area of his home. It is certainly worth having your network checked out to make sure you are getting the best service possible.